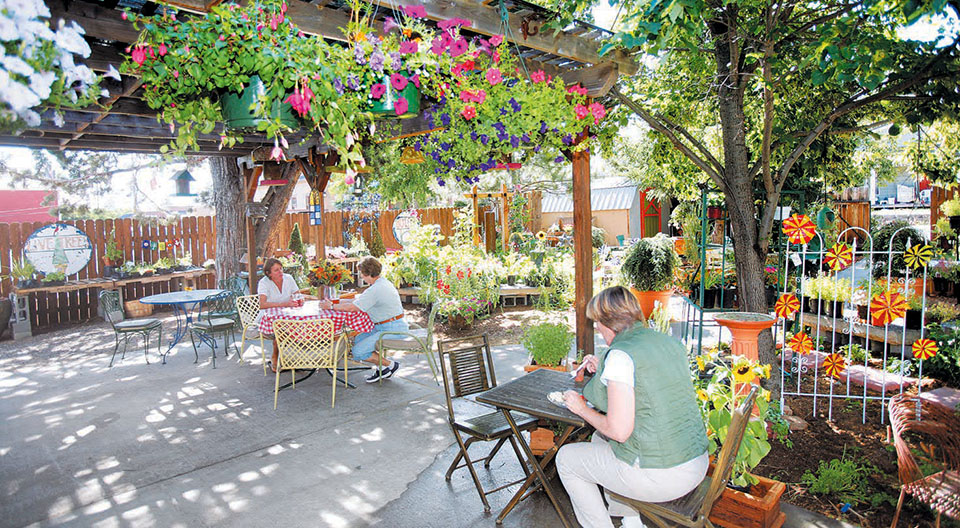 Poppies, a Sisters gourmet market and eatery, features a nursery, a market, and a café.

A dynamic trio of entrepreneurs launched Poppies, a Sisters gourmet garden market and eatery, which has everything form soup to nuts. Really. The establishment, the collective effort of Janet Zeulke, daughter Shayna Breslow, and chef Brian Shea, opened in July to rave reviews. It specializes in gourmet and specialty food items and plants for the discerning gardener.

The unique concept – part nursery, part market, and part café – melds the expertise of the three. Before moving to Sisters, Zeulke owned a Portland nursery, Shea created cuisine in Portland and his native Savannah, Georgia, and Breslow had worked in her mother’s garden business and restaurants.

Zeulke said they wanted their patrons to experience an environment at Poppies where all their senses would be touched. “We’ve created this incredible plate of food that’s beautiful, not only to look at, but to taste while you are sitting in this luscious garden,” she said.

“It’s exciting when I look out the window and see the reaction of people when they take their first bite of something,” said Shea. “When you go out and pick up plates it looks almost like they’ve been licked clean.”

Breslow chimed in, “All the sauces on those plates are gone; you’ve got to wonder how they did it.”

There is no salt and pepper on the tables at Poppies. Shea said he’s a firm believer that the food he serves should taste perfect without additional condiments. But if customers ask for salt and pepper, it’s available. In fact you can find different varieties of gourmet salt in the market.

As you enter Poppies, the steps are lined with bright yellow sunflowers plants and other potted flowering vegetation, all of which are available for purchase. “I wanted to do a year-round garden center that specialized in perennial, unique and hard-to-find plants, and a garden market,” said Zeulke.

But she knew that with Central Oregon’s winters there was no way a garden center could stay open year-round. That’s when Breslow joked that her mother lured her and Shea to Sisters from Portland with promises of various material goods, some of which have yet to materialize like the boat. The two, a couple since meeting in Savannah eight years ago, decided the offer was too good to pass up so they packed their bags and headed over the mountains.

At the time, Shea was operating the Grilled Cheese Grill, a Portland food cart business. He knew his creativity wasn’t being fully tapped with such a limited menu, and he realized being part of Poppies presented a rare opportunity he had to pursue.

One of Breslow’s first tasks was sleuthing sources for the market products and menu items. “I’m most proud of finding organic salami,” she said.

Poppies buys from local growers like Paradise Farms or receives produce from local gardeners who have grown vegetables of which they are not that fond, like this writer’s kale, which she gladly offered to Poppies. 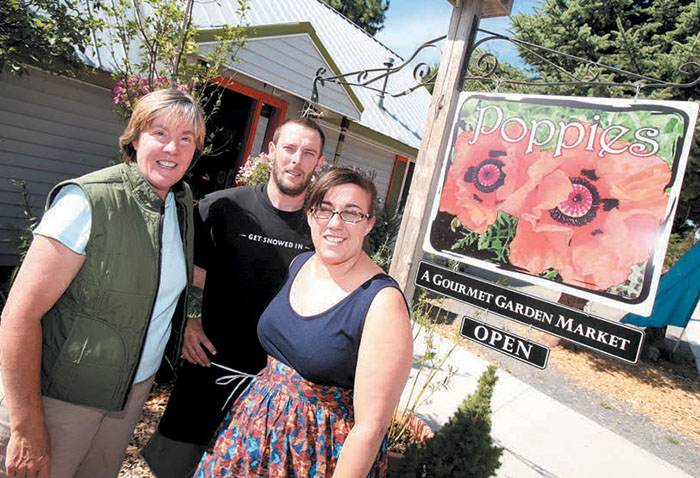 The building, originally a residence, underwent major remodeling. The three tore down walls, moved stairs, added industrial kitchen features, and painted the walls in cheerful yellow and orange hues. The market is in the main part of the building and sells a variety of products with an emphasis on local and sustainable. You can find everything from cards and dish soap to Irish butter and binoculars.

During summer months the food is served in the back yard where you are surround by beautiful plants and garden art. When winter comes, food service will move inside. Lunch is served from 11 to 4 and Sunday brunch from 9 to 2.

The three emphasized the efforts of other who have contributed to the birth of Poppies and continue to be involved, people like Meg Lubinsky, a pastry chef, who supplies all the desserts.

Giving back to the community is very important to them. Poppies is a Quilt Show and Sisters Folk Festival sponsor. Zeulke has provided plants for the Festival for a few years and rarely turns down requests for gift certificates for nonprofit organizations.

What’s clear about the trio, other than their talents and generosity, is the respect, humor, and joy with which they interact with each other. They are thoroughly enjoying their new endeavor.