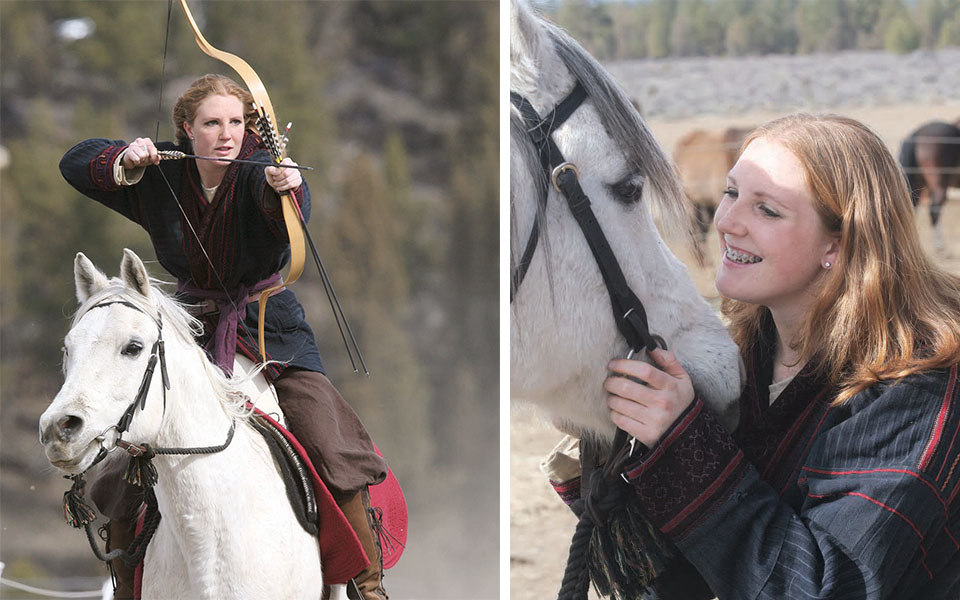 Central Oregon’s Katie Stearns is a rarity in the horseback archery world.

The Flying Duchess, as 24-year-old Katie Stearns is known in the horseback archery world, medaled each of the four years she competed in the South Korean International Horseback Archery Competition. Watching her long flowing read hair whipping in the wind as she shoots arrows atop her racing horse, you understand how she got the name. She is a rarity in this male-dominated sport.

No one in her family rode horses but after riding a neighbor’s horse at age two, she says she became addicted to riding.

“When my parents would ask me what I wanted for birthdays and Christmas, it would always be, ‘A horse, a horse!’” she said.

When her mom remarried, she knew her stepdad was trying to gain favor with her so when she saw a horse-for-sale flyer at the Sunriver Post Office, she made her move. She talked her mom and stepdad into buying the horse that day. At age 11, Katie’s dream had finally come true.

Katie’s love of history and horses led her to mounted archery. “I just love anything old,” she said.

Shooting arrows from speeding horses dates to early civilization. The European and Asian cultures honed their skills during warfare and hunting. The North American Comanches were also very skilled at mounted archery. Its modern revival, usually accompanied by medieval martial arts, includes elaborate clothing, swords, and spears, which will be on display in October at an international competition right here in Bend, Oregon.

Competitors from South Korea, Germany, the United Kingdom, Brazil, Mongolia, and Poland are expected to compete in six events. There’s the single shot, where a rider has 15 seconds to run a 120-meter course and shoot from the side at one target. In the double shot, also a 15-second 120-meter course, a rider shoots at a target in front and then turns and shoots from the back at another target while galloping at breakneck speeds. The serial shot is a 150-meter course in which the rider has 20 seconds to send a speeding arrow at five targets.

The last event is called a Mogu. A rider chases a ball pulled by another rider and shoots at it. Marks on the ball are scored by how many times, and how well you were able to hit it. In addition to a single rider, the Mogu competition is also presented with two riders and as a team. 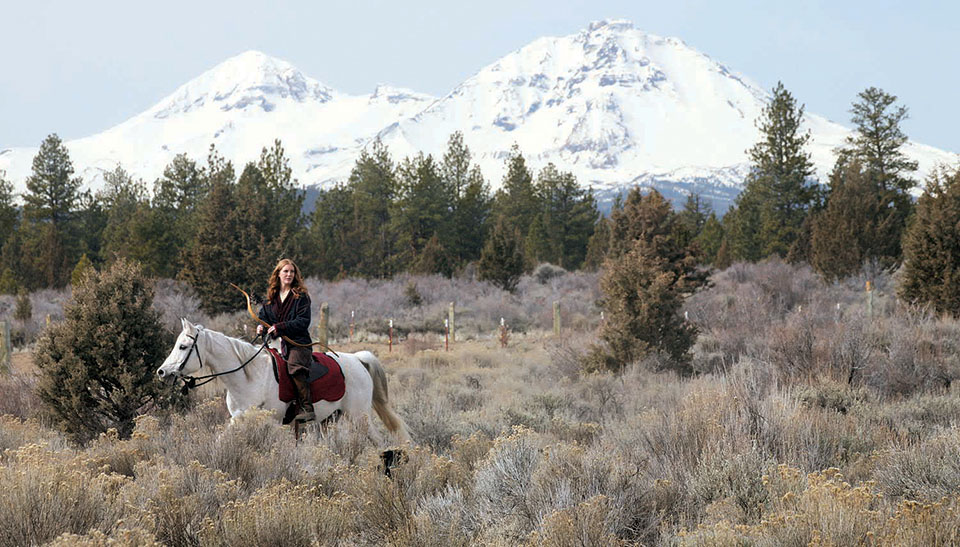 In between competitions at the Bend event, there will be medieval martial arts exhibition. Riders and horses in full warhorse regalia will demonstrate medieval combat, and Warm Springs Tribal members will be setting up tents and performing native dances.

Katie and Holm Neumann are organizing the event, which will be held at Holm’s Central Oregon ranch. Holm, a semi-retired orthopedic surgeon, who breeds Brazilian Marchador horses and competes internationally, was Katie’s first teacher. They both sit on the board of the Mounted Archery Association of the Americas, a Pan American organization devoted to promoting and supporting mounted archery.

“I could see Katie was a natural at mounted archery the first less I gave her,” Holm said.

As a college graduation present to herself, Katie spent two weeks in Mongolia living with a nomadic herding family in a Ger, a round felt-lined tent structure also called a yurt.

“I milked cows and helped turn the milk into butter and yogurt,” she said.

Riding the Mongolian gaited horses, she helped move a herd of 500 to 600 horses to water and back every day.

Katie will compete at the 2010 South Korean International Horseback Archery Competition. When she first started competing, the Korean Masters didn’t quite know what to make of her.

“The Masters consider me part of the family now,” she said.

She is moving to South Korea for at least six months to further her riding and martial arts skills and learn horseback acrobatics following the October competition in Bend.

Katie doesn’t plan to use her University of Oregon anthropology degree but instead intends to follow her passion of communicating with horses. Last summer, she apprenticed with Terrebonne horse trainer Clint Surplus who practices natural horsemanship.

“He told me I was more of a help than a nuisance, so I am going back this summer,” she said with a big grin on her face.

“If I know I’m going to work with horses I wake up happy,” she said.