The Brew’s in the Beef

What do you do if you have beef to sell, live in an area with nearly a dozen microbreweries and want to support sustainable ranching?

You fertilize your hay fields with “beer water” and feed your cows beer mash (spent wheat, hops and barley), waste byproducts of brewing beer. Then you market your product as Barley Beef.

Barley Beef is a partnership between Rob Rastovich and Matt Borlen, two local cattle ranchers. Rastovich also has a day gig as a computer programmer.

The Rastovich family has been on their ranch in southeast Bend for almost 100 years. Borlen, who was an infant when his family moved to Bend in 1972, doesn’t spend much, if any time, near a computer. Borlen said he likes “wheels and motors.”

Together, Borlen and Rastovich are a perfect pair.

“Bend has had this huge influx of breweries come on, and it just made sense to us to market the beef as part of the microbrewing culture that’s here,” said Rastovich.

Everything a cow eats affects the taste of the beef. Barley Beef has a different taste than corn-fed beef, the kind of meat we buy in supermarkets, the partners said. “It’s on the leaner side,” said Borlen.

A beer mash diet adds a flavor that beef from cows that are only grass fed don’t have. So it’s a new entry in the trend to consume locally produced products free of antibiotics and hormones.

After Rastovich weans his steers, he takes them to Borlen’s ranch in Alfalfa where they begin their beer mash diet supplemented with pasture during the summer and hay in the winter.

Unlike the beef most of us consume, which changes hands several times before it makes its way to our dinner plate, the Barley Beef guys emphasize that they retain ownership of their cows until they are butchered and their beef sold.

“I can actually tell you the spot on the Central Oregon property where each cow was born,” said Rastovich.

Borlen and Rastovich were just two guys who used to sell their cows at auction every fall and get new cows in the spring, usually losing money on the deal. They said they thought that was just the way a farmer was supposed to work — “buy retail and sell wholesale.”

“We figured there had to be some way to get more out of these cows, so I hooked up with Matt to see what he was doing,” said Rastovich. That’s when they came up with the idea of Barley Beef.

Borlen’s other day job figured into their plan to market Barley Beef. Agri-Cycle, a company started by Borlen’s father to dispose of septic tank waste, had started picking up beer wastewater as well. In 1993, Agri-Cycle signed a contract with Deschutes Brewery to haul away its high-strength wastewater.

“The wastewater can’t go to the city,” said Borlen. “It has too much sugar and protein in it.” 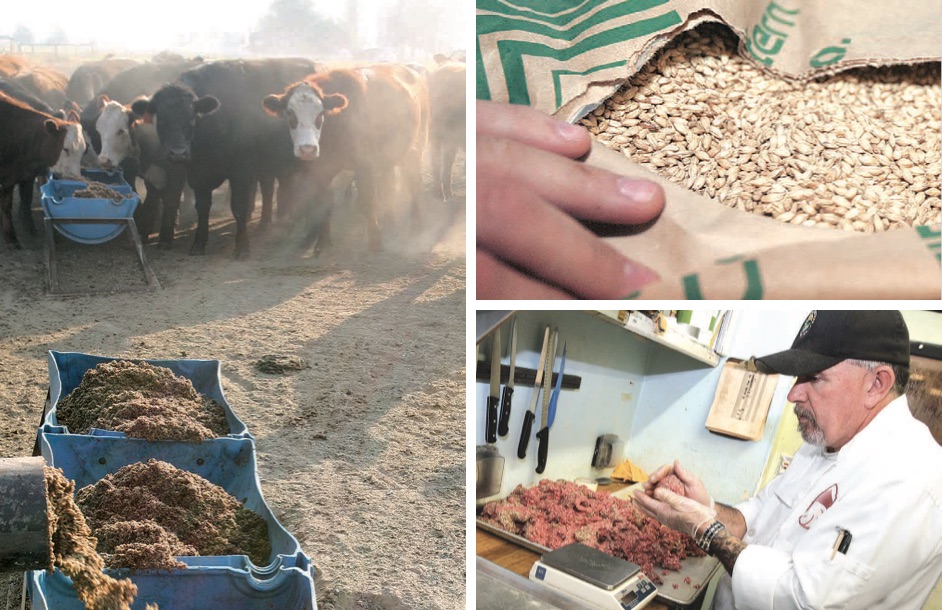 This August, Agri-Cycle picked up four loads a day from Deschutes Brewery and applied it to hay fields at the Borlen Cattle Company, the Rastovich Family Farm and other Central Oregon farmers free of charge.

“If Agri-Cycle didn’t pick up the wastewater, we’d have to treat it at the brewery, and that takes lots of capital,” said Tim Alexander, the utilities manager at Deschutes Brewery.

It’s an arrangement that works for everyone. Deschutes Brewery eliminates the need to invest in costly treatment equipment, Agri- Cycle makes money hauling it away, and farmers and ranchers receive fertilizer high in nitrogen at no cost to them.

Agri-Cycle also removes the spent grain from most of the microbreweries in Bend and Redmond, which it then feeds to the Barley Beef cows and the beef Borlen Cattle Company sells to Deschutes Brewery.

Alexander said breweries have always sold their spent grain to farmers, but it’s pretty rare to have everything so close together—the brewers, the hauler, the hay fields and the cows. That’s what makes the Barley Beef story so unique.

“If you go to Deschutes Brewery today and have a burger and a beer, that cow that you’re having the burger from ate the beer that you’re drinking,” said Rastovich.

James Meskill, the general manager at Deschutes Brewery and Public House in downtown Bend said it all started as a 20- pound order of beef for a meatloaf special. It’s now turned into a daily order of 70 pounds during the summer months for the burgers.

When asked where they see their newly formed partnership and Barley Beef marketing efforts going, Rastovich replied, “It’s where we are not going. It’s not to get to the level where we’ve got a thousand head of cows and we become the corporate entity that we are the antithesis of now. Our goal is to provide local farmers a way to sell their beef to local people and retain ownership.”