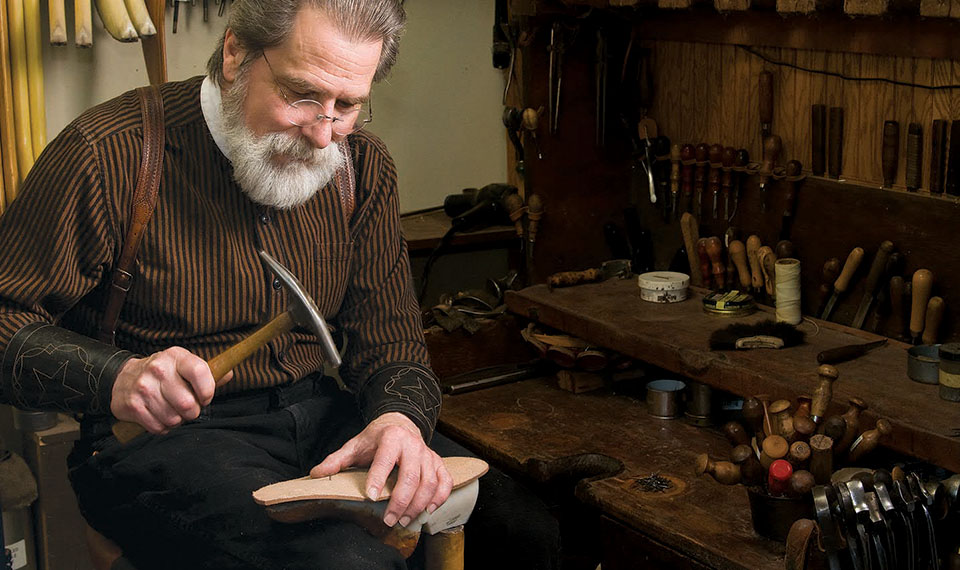 Boot maker D.W. Frommer creates custom-made boots from his Redmond workshop that are sought after throughout the world.

Did you know that cowboy boots originated from the boots worn by the Duke of Wellington when he defeated Napoleon at the Battle of Waterloo? This is the kind of information one learns when they chat with D.W. Frommer, Redmond’s world-renowned custom boot maker extraordinaire.

Frommer greeted me at the door of his shop that sits behind his Redmond home. He was attired in tooled, brown leather suspenders, and cuffs, with pants tucked into his high-top black and white boots. Smiling through his gray handlebar mustache, he introduced me to his wife, Randee, who works alongside him, and their rescued Greyhound dog, Rosie.

Examples of Frommer’s custom-made boots are on display in the Cowboy Hall of Fame and the Gene Autry Western Heritage Museum, though Frommer says he didn’t always aspire to become one of the top custom boot makers in the United States.

“My dad was a metallurgical engineer, and he wanted me to go into business,” he said.

Frommer’s early years were spent in a small Missouri town that he likened to “Mayberry,” the idyllic fictional community depicted in the 1950s TV Show staring Andy Griffith. His first exposure to working with leather came when his parents gave him a wallet-lacing kit when he was around 10 years old.

“That planted the seed that took a long time to germinate,” he said.

After military service in Vietnam, he eventually made his way west to the Willamette Valley, where he found a job in a shoe repair shop.

“Horses weren’t my first calling, but I did wear shoes and boots on a regular basis,” Frommer said.

When a Billings, Montana friend, who worked for a custom boot maker, phoned needing a shoulder to cry on because his wife had left him, Frommer immediately offered his.

He hitchhiked to Billings and ended up apprenticing with Mike Ives, the custom boot maker. Ives told Frommer, “The only thing I can do for you is sit you down and take you through a pair of boots, and every time you make a mistake, hit you upside the head with my baseball bat.”

Ives never used his baseball bat on Frommer, but he did teach him the basic skills that set him on his way to his current status at the top of the custom-boot-making world. Frommer has learned from many since then.

“If you’re going to be in this business, you have to think of it as a continuing journey,” he said. “It’s a learning process that will continue the rest of your life.”

Returning to the Willamette Valley, Frommer set up his own shop in Brownsville. A reporter was covering a parade in town when he spotted Frommer’s store and decided to interview him.

“A week after the article appeared in the Albany newspaper, I was all of a sudden a year behind in orders,” he said, “and by the time a month was over, I was two years behind, and I have never been less than two years behind since then.”

Sixty percent of Frommer’s customers are men. They are people who can afford from $1,500 to $5,000 for a pair of boots. They include lawyers, doctors, ranchers, stockbrokers, winemakers, and even working cowboys.

They come from all over the world—Japan, Venezuela, England, Switzerland, and Saudi Arabia—to commission Frommer to make their boots, as well as to study the boot-making craft.

Frommer’s customer with the most unique profession is a Brussels, Belgium architect who restores castles. The architect plans to return next year to spend three weeks studying boot making with the master craftsman.

During their time with Frommer, students read his three self-published books and make a pair of boots.

“I pour my 35 years of wisdom, techniques, and knowledge into their skulls,” he said. “Sometimes it just leaks out of their ears as I pour it in.”

Frommer figures that if 20 percent of his students actually go into shoe or boot making, for any length of time, he’s probably “on the top of the heap as far as teachers are concerned.”

When asked what makes him such an excellent boot maker, Frommer was silent for the first time during the interview. His wife, Randee, broke the silence.

“He is always learning new techniques,” she said. “He will take an order from something he doesn’t know how to do, and he’ll work until he perfects it. He has a very keen eye, and he’s very particular about what he does.”