Taking on the Fashion World

From serving drinks to filling international orders for her jewelry, Beeson-Straw continues an extraordinary journey toward growing success.

She was tending bar on the Oregon coast when patrons kept asking her about the jewelry she wore. Between pouring drinks, Heather Nashelle Beeson-Straw would tell her admirers that it was jewelry she had designed and made.

From those humble beginnings grew Nashelle, a successful and fast-growing Bend business that sells its locally made line of high-end fashion jewelry throughout the U.S. and internationally.

Beeson-Straw, in fact, just returned from the Mercedes Benz Fashion Week in New York City, one of the biggest extravaganzas in the fashion world where all the spring trends in clothing, shoes, handbags, and jewelry are shown. She had front row seating at this celebrity, invitation-only event where she watched models prance down the runway wearing her new line of wood jewelry, Urban Forest.

An Alaskan Native, Beeson-Straw said she was obsessed with fashion from an early age. She didn’t gravitate toward traditional education, but she did spend her days reviewing fashion trends in the Juneau library. “I would get every magazine and book in the library and just sit day-after- day studying.”

Beeson-straw left school at age 16 and traveled around the country snowboarding and expressing her artistic talents via singing and dancing. Returning to Juneau, she took her first formal art class – metal arts – at the University of Alaska, where she fell in love with the process.

“I lost track of anything that was bothering me,” she said. “I didn’t care what time it was; I was just lighting torches and soldering.”

Leaving Juneau again, she started her stint as a bartender in Cannon Beach. Word spread about her designs, and women would come to the tavern for showings of her jewelry, which she kept under the bar. Eventually, stores in Cannon Beach and Portland started selling her creations.

On her way to San Francisco for more training, she came through Bend on what she thought would just be a “pit stop.” She ended up falling in love with Bend and her next-door neighbor, to whom she is now married and with whom she shares three young boys. 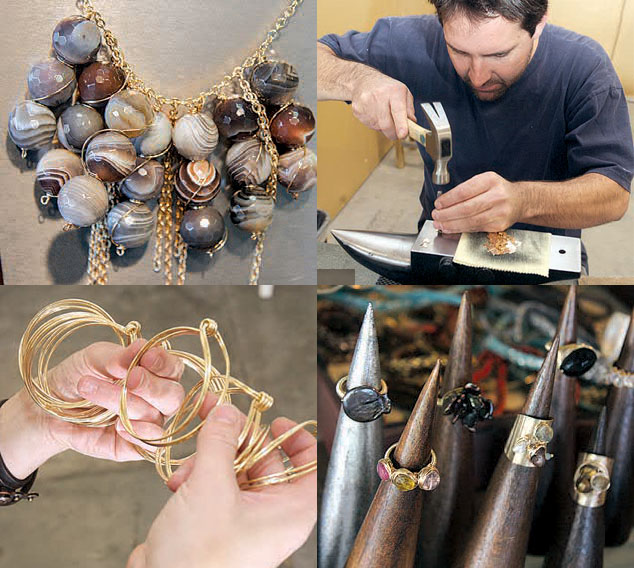 After moving to Bend, a friend who had a clothing store next to the Pine Tavern, offer her a space for a downtown gallery. That lasted for two years, and Beeson-Straw said things were going great. She was about to give birth to her first child when the building owner decided to sell, leaving her with no place to display her jewelry. “I got really scared because I thought I had a lifestyle for myself and my baby, and all of the sudden I didn’t.”

Heeding the advice of a colleague, she decided to try to market her jewelry at a Los Angeles trade show. But she only had one day to produce a line and mail it off for a juried review in New York City.

“I went home, and my husband and I made a collection through the night,” she said.

Once accepted, she had a week to prepare for the trade show. She didn’t have any marketing collateral, only a “makeshift business card” when she toted her three-month-old son and her jewelry to L.A. With her jewelry displayed on a cloth-covered card table while her son sat beneath, she wrote orders worth $43,000. The most she had ever sold in a month until then was $1,000.

She arrived back in Bend, with a stack of orders and “just started crying,” overwhelmed with all the work that lay ahead. She and her husband managed to literally “bang out all the orders” in her living room. At the time, she didn’t know what QuickBooks was and hand-wrote all her invoices, adding little notes with hearts drawn on them thanking buyers.

The days of making jewelry in her living room are long gone. She knows about QuickBooks now and employs 32 people, including two designers, a marketing team, and a recently-hired executive officer, who all work in a warehouse in southeast Bend. The site includes a retail showroom.

There have been growing pains, and at the end of 2009, overwhelmed with the rapid growth of Nashelle, and dealing with major surgery for third son soon after birth, she considered selling the business. But that’s all in the past. When asked what lay ahead for Nashelle, her response indicates no lingering will to quit.

“I want to take on the world,” she said.

With the lunching of the new wood jewelry, she plans to expand that collection, plus start designing and marketing handbags, shoes, and dresses.