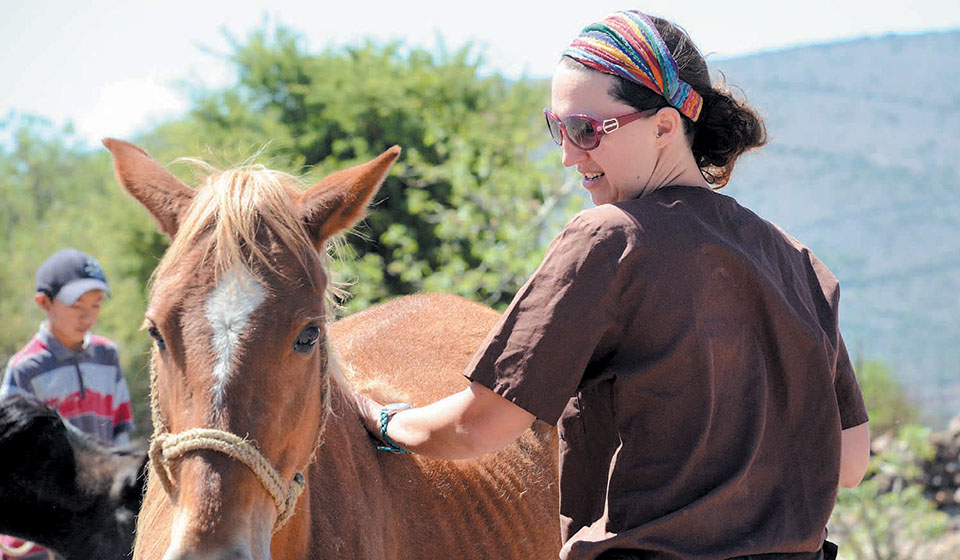 ‘…show them a better way’

Shannon Findley didn’t always want to be a veterinarian. But when she decided that she probably wasn’t going to be a ballerina, healing animals was her next choice.

When you listen to her talk about her passion for treating animals in underserved rural communities in the U.S., Mexico, and South America, you know she made the right decision – for her, the animals, and their owners.

Findley, a veterinarian at Bend Equine Medical Center in Tumalo, spends her vacations and her own money traveling to rural communities where animals are in desperate need of care.

There’s actually a name for volunteers like Findley. They’re called equitarians, a play on the word “humanitarians.”

An equitarian is a person who provides education, leadership, and assistance for working animals, which include mules, horses and donkeys that are used primarily for family income, agriculture and/or transportation.

“It really appealed to me because I wanted to do some humanitarian work with my veterinary degree,” she said.

The R-VETS website makes it clear that these trips aren’t for everyone. You may sleep on the floor, have cold showers, or none at all, eat sporadically and work 16-hour days.

The veterinarians provide all kinds of treatment – vaccinations, deworming, wound care, hoof care, and minor surgeries – and offer a lot of education. They don’t want to come back every year; they want to create sustainability.

“It’s so simple,” she said. “If you teach that guy, he teaches his friend and his neighbor, and you’ve made a huge quality of life difference in that animal.” 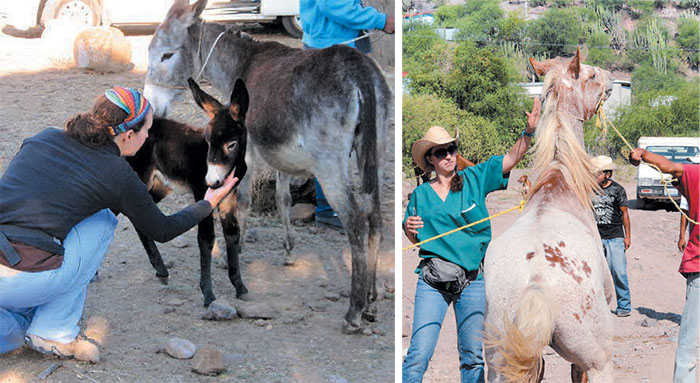 Horse handling skills are equally important because many of the horses are wild.

“They’re defensive because a lot of the times they’re mistreated,” said Findley.

Horses are not born mean but can become mean because of abuse.

According to Findley, the manhandling of animals comes from ignorance and not from lack of caring. That’s why educating animal owners is so important.

“When you can show them a better way, it’s very powerful,” she said.

R-VETS holds community events where they talk about basic care because typical owners don’t know how to provide for the basic needs of their animals.

One of the biggest challenges for Findley has been not judging the animal owners. She learned that lesson early on when still a student at the University of California at Davis. It was during her first volunteer trip to the Hoopa Indian Reservation in northwestern California.

His name was Wesley, and he showed up with a cat inside a box.

“He had no teeth, and he smelled,” she recalled.

He started to cry because he was worried that his cat was overdue for its vaccination because the previous year, the veterinarians had arrived a week earlier. When she opened the box, she found a longhaired cat that was “impeccably” groomed. Wesley had walked five miles, and it had taken him two hours to get there.

“He touched my heart so much because I had absolutely judge him” she said. “I didn’t know that I was walking into a story that I would remember forever.”

During a trip to Peru in an area that had no electricity and water, and was only accessible by foot, the team of volunteer vets discovered that the horses were only getting watered once a week. As a result, the horses had colic and the owners believed it was because a spider had bitten them, not because of lack of water.

“Some things you can change and some you can’t because the beliefs are very embedded in the culture,” she said.

So, Findley focuses on the things that she can change. Some solutions are very simple, like the man who brought his donkey to her with very bad saddle sores. He showed up with 10 pads under the saddle. She showed him how to make alterations to the saddle to stop the sores.

“He was trying to do something,” she said. “He just didn’t know how to make it better.”

Findley says one of the most important lesson she’s learned from her experiences with R-VETS is that you really can change the world a little bit at a time by letting go of your preconceived notions about people.