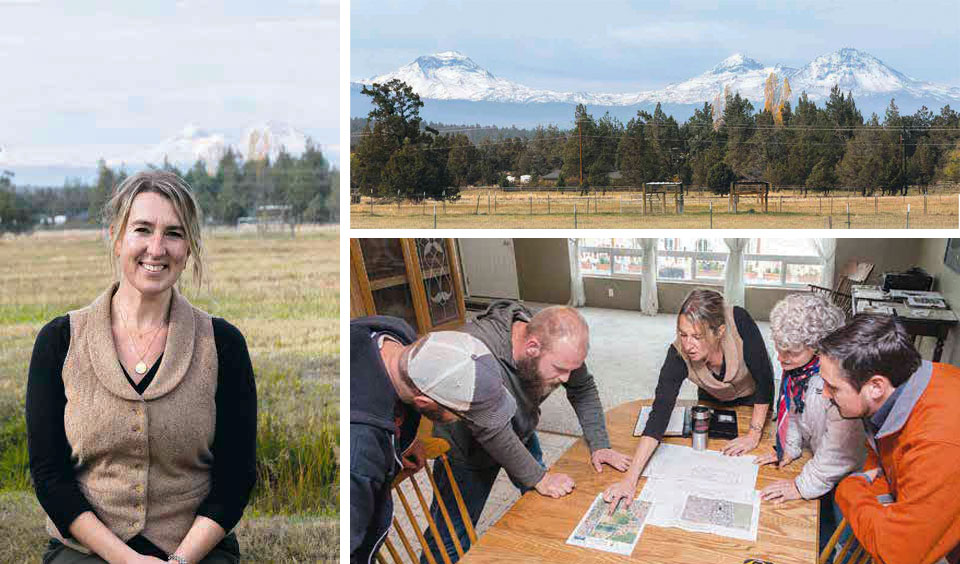 Central Oregon Veterans Ranch gives veterans a chance to live life with meaning, and for some, to finish their lives in peace.

When Kara Kelly, 42, came home from saving lives in Iraq as a U.S. Air Force flight nurse, she turned to alcohol to help deal with her post-traumatic stress disorder, (PTSD). Joseph Florio, 67, a Vietnam veteran, said he wasn’t sure he was going to live beyond his 19 years due to his combat experience. He promised himself after he made it through that difficult time that he would help other combat veterans.

Florio has made good on that promise. He and Kelly have restored serenity and health in their lives by supporting other veterans suffering similar effects from war. They are just a few of the folks who have coalesced to bring the vision of Alison Perry to fruition.

That vision is Central Oregon Veterans Ranch (CORV), a nonprofit, 19-acre community where veterans can come to heal, farm, receive support from other veterans and when facing a terminal illness, die with dignity.

While not a veteran herself, Perry has family members who are, or who currently serve in the military. As a mental health therapist at the Portland Veterans Administration Hospital, Perry counseled returning veterans with PTSD. She said that experience convinced her to move away from that kind of institutional care.

“One of the wounding that happens with people in the military is not just the combat experience, but it’s being in an institution and how your life is impacted when an institution runs your life,” Perry explained.

Ranch manager and Iraq combat vet Wray Harris, 28, said trusting others is difficult for him. The veterans launching the ranch project all agreed that trust is more easily established with other vets because you don’t have to explain; they know the devastating impact of war.

“In combat, you wind up doing bad things, things that you wouldn’t normally do and it’s almost impossible to explain how that works to someone who has never experienced it,” said Florio, the Vietnam vet who is also a COVR Board member.

“There is an ugly side of life that most people don’t get a glimpse into,” Harris added referring to his combat experience. “Having the ranch is kind of a nice way to sort all of that out because not everything is ugly and it can be hard to remember that.”

The vision for the ranch is three-pronged. First is to establish a working ranch that fosters camaraderie among veterans and opportunities for community service. Second, through sustainable agriculture, the ranch will provide skill development for veterans. And third, the ranch will be a place where terminally ill and aged veterans can receive specialized care for their unique needs.

Afghanistan war veteran Mike “Wally” Walgrave, 40, just arrived at the ranch on a fellowship with The Mission Continues, a national nonprofit that “empowers veterans who are adjusting to life after the military to find purpose through civic action.”

Staff from Oregon State University Extension, and other agriculture experts, are advising the ranch organizers. COVR’s goal is to build a profit-making agri-business.

“There is a big movement around the country to engage veterans in farming and ranching projects,” Perry said.

The Farmer Veteran Coalition, a national organization, says it is mobilizing veterans to feed America. The group’s website states that it “works with veterans in the food and farming community in all 50 states and U.S. Territories to provide farming education and veteran assistance to those in need.”

What is unique about CORV is its focus on providing a home for aging and dying veterans. To meet state licensing requirements, the house on the property is being remodeled. Upon completion, it will be the only adult foster home in Oregon for veterans. Perry expects the house to be ready for occupants in early 2016.

Volunteer Deborah Hopman, a hospice nurse and wife of a Vietnam vet, is using her experience working in other adult foster homes to make that happen.

“We wouldn’t be opening up this home without Deb,” said Perry.

Using his own money in April 2015, Tom Kemper, the executive director of Housing Works, arranged for bridge financing to purchase the $400,000 property between Redmond and Bend. Kemper gave the down payment and secured a loan through Washington Federal.

“When Alison told me about her vision for the ranch, I said ‘this needs to happen,’” Kemper remembered.

CORV is kicking off a fundraising campaign on Veterans Day to retire the debt. The first 100 businesses or individuals to donate $1,000 will have their name engraved on a plaque in the peace garden at the ranch.

“This is truly a community effort,” said Perry, “Without the generous donations of time and money from veterans and others, we wouldn’t be where we are today.”