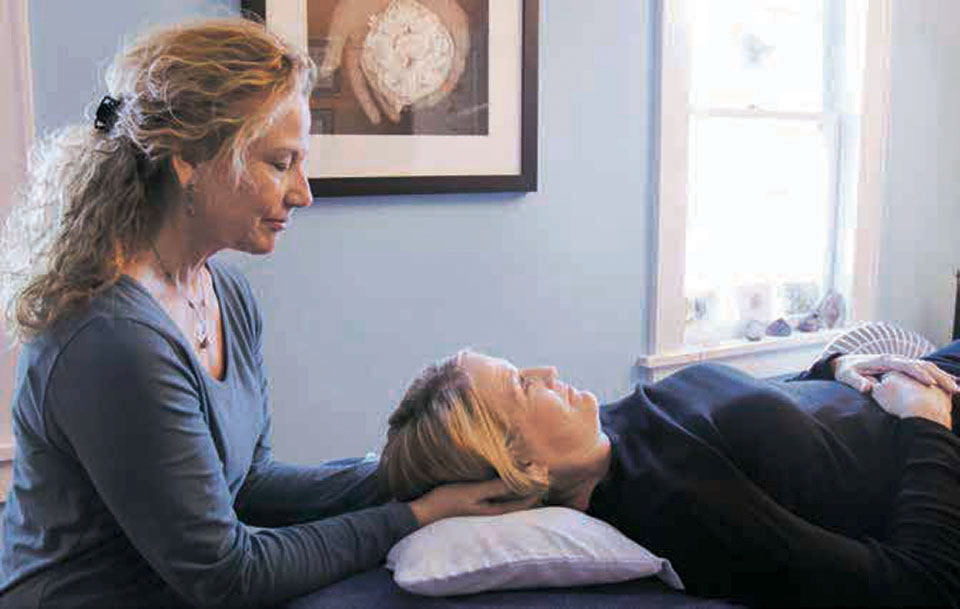 Being injured in an auto accident while pregnant led to Dr. Reichert’s specialty in alternative injury and pain treatments.

Dr. Susan Reichert’s medical practice was forever changed one fateful day. Reichert, a MD and practicing pediatrician, was pregnant when she was injured in a car accident. She didn’t want to take medication or have invasive procedures while she was pregnant, so she looked for other ways to deal with her injury and pain. That search led her to more alternative treatments.

“I made my way to osteopathy and craniosacral therapy,” she said. “It helped me immensely.”

Until Reichert’s car accident she was a traditional pediatrician. She is board certified in pediatrics and has a sub-specialty fellowship in child abuse and neglect. She received her MD from the University of Cincinnati and practiced in Denver and Oakland, California. Reichert came to Bend to take a position at the KIDS Center, a child abuse intervention center, where she spent six years as the medical director.

Reichert’s experience as a patient receiving “hands-on” therapies changed the way she began treating her own patients. It didn’t happen immediately, but over time she sought training in various “alternative” modalities including those that had helped her through her injury.

One of those trainings, taught in part by Janice Blumer, DO, was a rigorous course in cranial osteopathy. Blumer is an assistant professor and vice-chair at Western University’s College of Osteopathic Medicine of the Pacific – Northwest located in Lebanon, Oregon where Reichert herself recently assisted teaching a cranial course.

This therapy is based on the integration of the whole body. The head, brain and entire spine and sacrum are considered related and operating as one connected whole. Gentle manipulations of the head and spine are used to encourage the flow of cerebrospinal fluid and to release restrictions in the body.

“Susan is trying to bridge the gap between allopathic and osteopathic and is doing a great job of it,” Blumer said.

Allopathic describes “western” medicine, which focuses on disease management through medication while osteopathic medicine emphasizes prevention and looks at the patient more holistically.

Blumer said Reichert also brings a variety of techniques to the table that are not osteopathic but that are complementary.

“Osteopathy is a kind of medicine that uses more manual therapies to encourage the body to use its own self-healing ability and it gives an alternative to medication and invasive procedures,” Reichert said. “It’s more like mind, body, spirit medicine.”

Reichert feels she brings the best of both fields to her practice. “I grew up in western medicine and I discovered the osteopathic approach and I find that they marry very well together.”

She says MDs and DOs are all on the same team and that there are some things that osteopathy treatment is better for and some things for which you need traditional medicine.

Reichert found that she loved using her hands to help people heal. “It allowed me to bring all that I am and all that I know as a western medicine physician but it gave my hands something to do to treat those people.”

She sees children and adults in her practice now. She treats patients who are in pain or who experience a wide variety of physical, emotional and behavioral problems. Many of her patients do not want to take drugs.

Lactation consultants at St. Charles Health Systems may refer mothers to Reichert when their babies are not nursing very well.

Reichert said sometimes babies have had their necks turned in one position in utero and they can’t move their neck around well enough to feed successfully.  Sometimes there are also issues with their tongue or jaw that interferes with nursing.

“I can do a couple of very gentle treatments that can release the restrictions and allow them to feed better,” she said.

Reichert said she loves supporting new mothers and offering them ways they can use gentle techniques to soothe, comfort and connect with their babies.

Reichert believes that our bodies have a tremendous ability to heal themselves. She helps patients access that ability.

“Susan continues to challenge herself and push the boundaries of helping patients find health — of searching for ways to bring somebody to health which is a very osteopathic way of thinking,” said Blumer.

Reichert is part of a trend in medicine that is moving toward integrative practices. A major change in that direction occurred recently. A February press release titled, “Allopathic and Osteopathic Medical Communities Commit to a Single Graduate Medical Education Accreditation System,” announced that both MDs and DOs would now have the same residency training.

“Up until now residency training for MDs and DOs has been a separate track but beginning next year, MDs now have the opportunity to learn osteopathic manipulations in their residency training program,” said Blumer. “This change will likely have more people looking for osteopathic philosophy as well as techniques.”