Keeping it in the Family

Running a family business – husband and wives, or mothers and daughters – master success in their own individual ways.

Kathy and Tim Garland laugh a lot when talking about how they together manage the Jackalope Grill.

According to Robin Clem, interim director of the Austin Family Business Program at Oregon State University, (OSU) two ingredients create successful family businesses: excellent communication and a sense of humor. The Garlands definitely have the humor part down.

When asked how they resolve conflicts, Kathy said “I like to say we only argue when Tim’s wrong.”

One of the “conflicts” the Garlands said they have is over the wine list. Tim likes the wines to sell within a couple of weeks after purchase.

Family businesses featured in this article have mastered, each in their own way, Clem’s most important ingredient – good communication skills.

“We take a lot of Harley rides,” said Tammy Pennington, who with her husband, Barry, own Bobcat of Central Oregon.

The Penningtons set aside time each day to talk about the business. They try to have lunch together for their daily discussion, but if that doesn’t work, they try to fit them in sometime during the workday.

The Willitts family developed and runs the Five Pine Lodge and Conference Center, which includes the Shibui Spa, and other businesses. Sons Riley and Greg work alongside their parents, Bill and Zoe. All the Willitts agreed that when issues arise, they talk about them right away.

“We were fortunate to be raised by a hippie-turned yuppie, and we were taught to communicate everything,” said Greg. “All of us feel empowered to voice our concerns about the business.”

Riley agreed. “Like any other family, we have our issues,” he said. “The quickness at which it’s acknowledged and handled is the amazing part.”

All interviewed cited many more advantages than disadvantages when discussing working with family members. In fact, it was hard for them to think of many drawbacks. 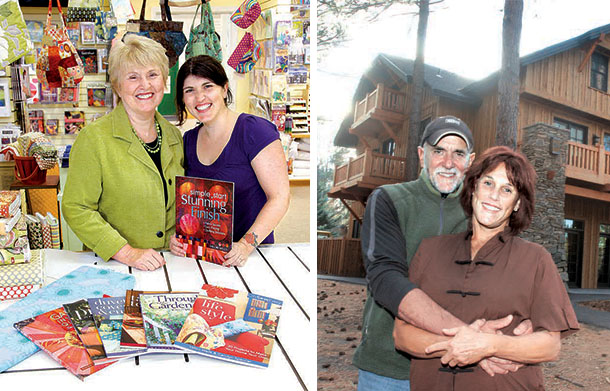 “We’re a really good team,” said Valori Wells, who joined her mother, Jean, nine years ago at the The Stitchin’ Post. The Sisters store sells material and yarn for quilting, sewing, and knitting, and houses the staff for the annual Sisters Outdoor Quilt Show.

Jean Wells said that after running the business by herself for many years, it was wonderful to have her daughter join her.

“I have someone who has as much invested in solving problems as I do,” she said.

One of the biggest challenges many family-run businesses face is the separation of home and work. The Penningtons try not to discuss work while they’re at home. If there is a need for talking business, they give themselves a time limit and make sure the children are not present.

It’s clear that these families, in addition to having good communication skills, have great mutual respect for one another’s skills, enjoy working together, and take pride in each other’s successes.

Zoe Willitts, who runs the Shibui Spa at the Five Pine campus, said her husband, Bill, is her greatest ally.“He’s going to watch my back, and he’s not going to let me fail, and I won’t let him fail,” she said.

All these businesses are still operated by their original founders. Some have their children working within the businesses but have not had to face succession issues when the founders exited. Robin Clem said this is one of the greatest challenges facing family-run businesses.

Bob Thomas dealt with this issue when he took over the business from his parents. He is the third generation to own and operate Bob Thomas Chevrolet Cadillac in Bend. His grandfather began the business in 1914, but now he is facing succession from the other end.

Neither of his two children – a son and daughter – has expressed interest in running the business, so he’s not sure what the fate of the business will be.

“I’ve got about 10 years to figure it out,” he said. “A lot of things can change, and we will just have to wait and see.”

Barry Pennington at Bobcat of Central Oregon said he likes to have his kids come down on the weekends and see what their parents do.

“I want to expose them to this kind of lifestyle,” he said.

Seems the Penningtons have already begun their succession planning. Their work is already showing signs of success, too, as their daughter, seven-year-old Emily, told her parent she wants “to sell tractors and pay bills when I grow up.”