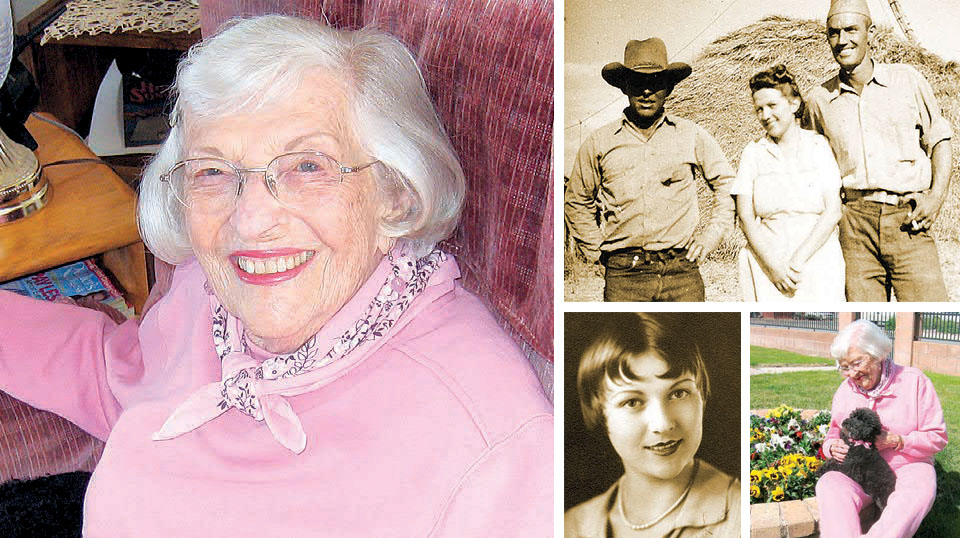 Boasting a ‘zest for life’ and doing just fine.

It’s Christmas 2008, and I’m at my mom’s home in Mesquite, Nevada. We’ve both just awakened.

I’m drinking coffee sitting on the couch still in my sleeping T-shirt. Mom is attired in pink pajamas and resting in her recliner with a maroon throw over her lap. Shadow, the black toy poodle, is by her side.

We’re watching news on CNN. A commercial appears. She mutes the sound and whips out her harmonica and begins to play “The Darktown Strutters’ Ball.” During every commercial break for the next 30 minutes, she asks me for requests.

“How about ‘Back in the Saddle Again’?” I respond. She raises the harmonica to her lips and blows a fine rendition. Gene Autry would be proud. She throws in a few Christmas carols as well. This is a woman who can’t read music and has never had a music lesson in her life. She can also knock out a tune on the piano and ukulele.

About an hour later, she’s changed into her pink sweatsuit, complete with pink handkerchief tied around her neck and – of course – pink leather shoes.

My mom’s creativity extends from music to art. She used to paint, but now she says, “When people ask me if I’m still painting, I tell them just my shoes. I use watercolor and acrylic on them when they start looking scruffy.”

She’s excited because we bought Aunt Jemima’s buckwheat pancake mix yesterday, and she’s preparing our “hot cakes.” She takes her first bite and exclaims, “This is tasteless! Why, I remember when you used to open the package and you could smell the buckwheat.” Disappointed, she finishes her one pancake. I have two, which taste pretty good to me.

Several minutes pass before she points to Aunt Jemima’s face and says, “There’s a phone number on that box. I’m going to call them and chew their assess out!”

She dials the 800 number and a real person answers immediately. I’m listening intently to Mom’s side of the conversation. She tells the person how excited she was to cook the hot cakes and then how disappointed she was when she tasted them.

“Where’s the bar code, Kathy?” I take the phone and give the bar code number to the nice woman on the other end of the line. I tell her she’s been talking to a 94-year-old.

“Tell her I’ve still got all my marbles and I can tell good buckwheat from bad buckwheat!”

Overhearing my mom, the woman asks, “What did your mom say?” I repeat the comment. By this time, the woman is laughing and telling me how sorry she is. She requests my mom’s name and address. She’s going to send her a coupon. She wishes us happy holidays, and still laughing, hangs up.

Delivered by a Mormon midwife, Josephine Genevieve Fogliani was the seventh of eight children born into an Italian immigrant family in November 1914, five months after the first World War began. The family lived on a cattle ranch in a remote part of Nevada, bordering Utah. She married Chester Oxborrow, also from a ranching family, and they settled on the Fogliani Ranch, buying it from my grandparents. They led a harsh life, one without electricity and indoor plumbing, with winters ranging from 20- to 40-below. Mom still recalls the year it was so cold some of the cow’s tails froze and dropped off.

They were so poor in the early years, Mom jokes, we didn’t have a pot to piss in or a window to throw it out of. But the pioneering spirit and determination to succeed that my parents demonstrated throughout their lives, created great role models for my brother and me.

My mother and her seven siblings possessed a certain lovable quirkiness. I heard stories of their youthful antics as I was growing up. The closest high school was far enough away from their ranch that four of the Fogliani girls, including my mother, boarded with a family in the Mormon settlement of Panaca, Nevada. Coming from a Catholic family, they felt a bit ostracized by the mostly Mormon girls, so one night they switched white divinity candy that the neighboring girls had set out to cool with horse dung rolled in powdered sugar. These stories — there were plenty of them – filled many a family gathering.

Mom and her younger sister, “Aunt Pete,” who is 85, spend a week with me every summer. They are the only surviving Fogliani siblings. We pull weeds, make jam, and laugh a lot. Mostly, we laugh a lot. A few years back, at age 89, Mom got on my horse, Sara, and took her for a spin.

She still lives alone, plants and maintains a vegetable garden every year, and has a wide circle of friends and social activities. She continues to amaze me with her positive attitude, quick wit, generosity, and boundless energy. Her calendar lists a piano workshop she plans to take in a few weeks.

Growing up my mom’s spunk and quick wit didn’t seem unique to me, especially given the Fogliani legacy. She was just my mom. In later years when I’d recount stories about her and some of her sayings, my friends would always say, “You’ve got to write these stories down.”

So it was that I found myself on Christmas Day capturing a few hours in the life of Josephine Genevieve Fogliani Oxborrow. In my elder years, if I maintain only half the zest for life that my mom has, I’ll be doing just fine.