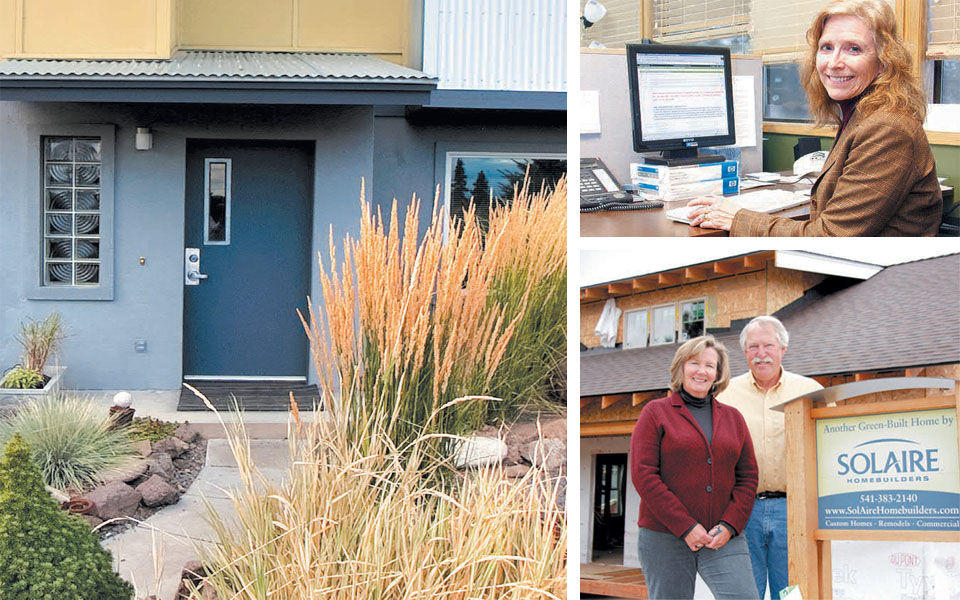 How Green is Central Oregon?

As ‘green’ changes over time, Central Oregon strives to stay ahead of the curve.

Sustainability and green building are terms we’ve gotten used to hearing in the last decade, but what exactly do they mean? And how has the “green movement” impacted builders and homebuyers in Central Oregon?

Take sustainability first. Gretchen Palmer, Vice Chair of the Green Building Council of Central Oregon said sustainability is more than just using energy-efficient technologies to build homes. When builders are planning a development, it’s things like orienting streets from east to west, leaving as many trees as possible and creating bike and walking paths.

The definition of green building has changed over time as building codes catch up with green practices, but what hasn’t changed is that the Central Oregon construction industry is way a head of national green building standards.

“Central Oregon is becoming a leader in the green building industry in Oregon,” said Cindi O’Neil, co-owner of Solaire Homes a green builder.

The numbers seem to support O’Neil’s statement. Earth Advantage, a nonprofit organization promoting green building has certified 1,608 homes or 24 percent of new home construction in Central Oregon as green built. The state rate is only 9%.

There are several energy efficiency certification programs developed by organizations and government agencies. Energy Star, a US Environmental Protection Agency (EPA) rating program, has lower standards than Oregon and Washington codes which necessitated negotiations with the EPA to create a special Energy Star program for the two states.

The rating process offers independent verification that a building or community was designed and built using strategies to improve performance in energy savings, water efficiency, carbon dioxide emissions reduction, indoor environmental quality, and a stewardship of resources and sensitivity to their impacts.

Even though Central Oregon gets high marks for its commitment to green building standards, that commitment is something that has grown over time. Palmer said that even five years ago there was resistance from some builders about using green technology in their homes.

Many things have contributed to the increase in green building — public education; increased awareness about the cost, health, and social benefits of green building; government and manufacturer incentives; rising energy costs; and energy-efficient building code requirements.

Bruce Sullivan, a program manager with Earth Advantage said he thinks that the higher number of certifications in Central Oregon is because the building industry is more amenable to green building.

“It’s an easier sell for me in Central Oregon because the builders and the customers are already sensitive to this,” he added.

Building contractor Mike Larraneta said he encourages his clients to use green building technologies.  “About 95 percent of those technologies can increase energy efficiency without increasing cost,” he said. While renewable resources like solar panels increase efficiency, Larraneta said the “payback is way out.”

The Bend Area Habitat for Humanity, which has a home on the Green & Solar Home Tour, has been using green building practices for years. Executive director, Mark Quinlan said Habitat has to keep its housing construction costs low to make them affordable for their customers. “We wouldn’t be building to green standards if it wasn’t cost effective,” he said.

Oregon state government revises building codes every three years and then local jurisdictions adopt and revise their codes accordingly. Over the years, code for insulation levels has increased and practices that were voluntary like weather wraps (a weather resistant exterior wall envelope) have become code. Palmer said she expects the next code revisions to be 15 percent above what it was three years ago.

Sullivan said voluntary certification programs pull the market, and building codes push the market. “Code waits for the market to settle out and follow behind looking for the path that balances cost and efficiency,” he explained.

Looking to the future some see the next advances in energy efficiency coming in home heating and cooling systems.

O’Neil thinks that with all the government and manufacturer incentives that exist, there will be advancements in active solar and wind technologies for the residential market.

But in the end O’Neil said a green built home is a better built home. “It’s just not about energy efficiency, it’s about building a house right so it lasts a long time.”