Gather Round at an Award-winning Art Event

My Own Two Hands is an annual fundraiser that brings artists and community leaders together for the benefit of art education.

A Portland emergency room doctor isn’t someone who would immediately come to mind as the creator of one of this year’s most unique artworks at Sisters’ annual ‘My Own Two Hands’ fundraising event. But Dr. David Pruett’s contribution, a cedar and cherry chest, is exactly what this event is all about–community coming together to celebrate art in all its forms to benefit Sisters students.

Pruett carved the chest and then asked Sisters Artist Dan Rickards, nationally known for his wildlife and landscape acrylics on canvas, to paint a scene on top of the chest.

“Woodworking is my therapy which helps relieve stress and keeps me sane,” said Pruett who owns a home in the Sisters area.

When Sisters artist Kathy Deggendorfer, the visionary behind My Own Two Hands, volunteered to help with the Sisters Folk Festival in its infancy, she had no idea it would spawn the offshoots it has. My Own Two Hands is one of those offshoots that raises $100,000 each year to support another offshoot the Americana Project, an educational outreach program. The Americana Project teaches students in all three Sisters schools guitar playing, song writing, performing, recording and the roots of American music and its cultural and historical implications. 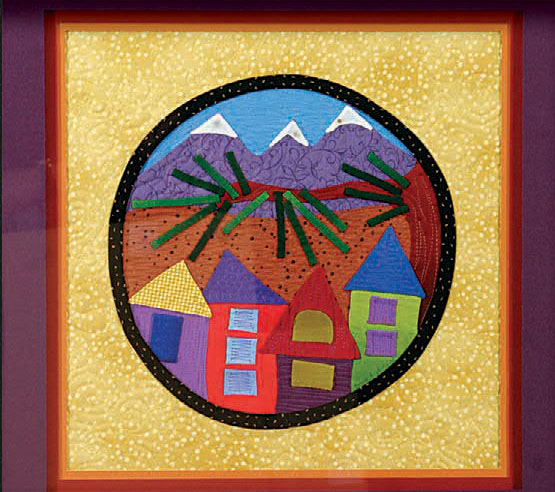 ‘Gather Round’ is this year’s theme coined by Kitt Stafford, an Americana Project art teacher. “I was inspired to find a theme that was welcoming and inclusive,” Stafford said.

Stafford’s inspiration came from seeing Sisters residents ‘gather round’ to help plan for the town’s future. That effort, called the Sisters Visioning Project, is bringing community members together to map the kind of future they want for their community.

That sense of community was evident at the first arts fundraiser, called ‘Painted Strings,’ which began in 2002 when Americana Project director Brad Tisdel bought 24 guitars from a Redmond pawnshop, and Sisters High School students and local artists “decorated” the guitars. The 24 ‘painted strings’ fetched around $17,000 at the first auction.

“We weren’t sure what to expect back then,” remembered Tisdel, “but all the artists went beyond our expectations. I was blown away then and continue to be amazed at the talent and generosity of the Sisters art community.”

In 2004 Deggendorfer approached singer/songwriter Ben Harper and asked if the Sisters Folk Festival could use the words from his song title, ‘With My Own Two Hands’ to name the annual arts fundraising event. Harper enthusiastically gave a thumbs up.

This year over 130 artists have donated. In addition, the artistic creations of 600 Sisters students will be displayed at selected locations around town.

The festivities begin on Friday, April 13 with a community art stroll from 4:30-7:00 pm. Several Central Oregon bands will be playing at sponsor locations where prospective bidders can preview all the art up for auction on Saturday night. SOAR is providing its bus to take folks to all the stroll locations.

“Laura gave us an amazing clay sculpture this year and Rosita’s spectacular offering is a grouping of three black and white portraits that are very cutting edge,” said Deggendorfer.

The young women come back every year and participate to help continue arts education in Sisters schools. The Americana Project gave them an opportunity to explore their creativity and now they are giving back.