Deschutes Land Trust connects the community to the natural world.

In the mid-nineties, the Sisters community was in a battle over a proposed land use action to develop property in a subdivision. “A lot of people in the community weren’t very happy with the proposal,” said Brad Chalfant, “and it became a very personal, very ugly fight.”

That dispute ended up in mediation and the mediator suggested resolving it by placing the property in a land trust. The mediator’s suggestion set in motion the beginnings of the Deschutes Land Trust and Chalfant become its first and only executive director.

The timing was right to form the Deschutes Land Trust. Many groups and mediation participants coalesced around the idea.

“It was clear that there was a real opportunity to do something that would be creative, that instead of polarizing the community would help problem solve and bring people together,” said Chalfant.

Connecting people to the land occurs when visitors are able to plant a willow or release a fish into a stream that before the restoration efforts of the Land Trust and other groups was not a hospitable habitat.

Once land is in the Land Trust’s care, improvements occur. Creek and habitat restoration not only benefit fish but other wildlife species like birds, deer and elk. 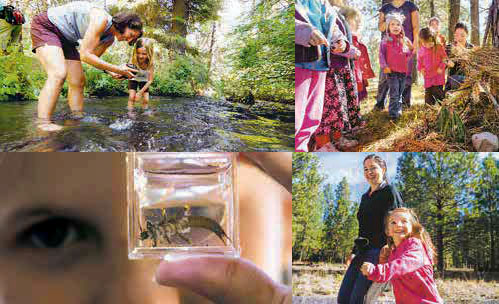 Linking children to the land occurs when they explore nature at the Metolius Preserve while building fairy houses using materials found in the forest or during the Land Trust tour that explores “the delicate and beautiful world of butterflies.”

There are many opportunities for the public to benefit from the Land Trust’s conservation efforts through its events and tours. Knowledgeable volunteers lead the guided hikes and walks through the various preserves that include a history of the areas..

In the Sisters situation, the landowner donated the land, but many of the acres under the stewardship of the Land Trust have been purchased with funds raised from diverse groups. In the case of the Metolius Preserve, the Land Trust raised $2.6 million to buy the land from Willamette Industries. Funds came from individuals, businesses and foundations.

To acquire the Camp Polk Meadow Preserve, the Land Trust partnered with Portland General Electric. When Enron bought PGE, the Oregon Public Utility Commission required it to establish a habitat mitigation fund, which was tapped to buy the Camp Polk Meadow land. The Meadow contains critical habitat for the reintroduction of Sockeye Salmon and Spring Chinook.

The Land Trust obtained Whychus Canyon Preserve two years ago and is currently working to protect an adjacent property that will connect the Preserve with another Land Trust protected property, Rimrock Ranch.

“If we’re successful, we’ll be able to restore a six-mile stretch of the Whychus creek that will benefit native fish and wildlife tremendously,” said Chalfant.

Mission: The Land Trust’s mission is to work cooperatively with landowners to conserve land for wildlife, scenic views, and local communities.

Vision: Healthy lands that support diverse populations of native plants and wildlife. Communities that are closely engaged with the land, that value the natural world, treat it with respect and are invested in its future. A region that, even as it grows, retains its natural attributes forever.

Deschutes Land Trust by the numbers: