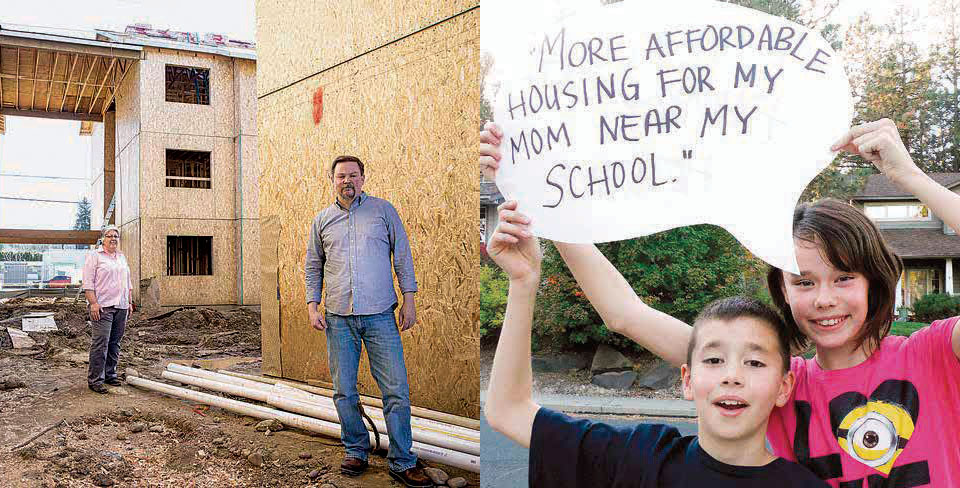 Public and the private sectors, along with philanthropic efforts, are coming together to find creative approaches to the complicated housing puzzle in Central Oregon and throughout the state.

Bend is not the only community in Oregon where civic leaders and public officials are scratching their heads in search of solutions to the lack of affordable housing.

“Affordable housing is the number one topic around the state,” said Kenny LaPoint with Oregon Housing and Community Services, the state agency charged with providing stable and affordable housing.

As LaPoint travels around Oregon he said it’s in the forefront of every conversation. “Every interest group wants to hear what’s going on to address the housing crisis.”

Rising residential rents in Bend and escalating home prices are affecting all income levels, but high housing costs are particularly acute for low-income people. Some reports put the Bend residential vacancy rate at less than one percent. According to LaPoint the vacancy rate in many Oregon communities hovers at less than two percent.

“Bend was the precursor of what was about to happen to the rest of the state,” LaPoint said referring to the rapid rise in rents shutting out many families from the rental market.

There are many players in the affordable housing field and they all contribute a piece to the extremely complicated puzzle of creating housing in Oregon. Those entities include foundations, nonprofits, government, banks and private developers.

Meyer Memorial Trust is leading the philanthropic effort to find creative approaches to the housing crisis in Oregon.

“We can’t build our way out of this crisis,” said Doug Stamm the CEO of Meyer. Instead, he said Meyer is taking a multi-pronged approach. It will restructure its grants and loan programs plus convene cross-sector groups to brainstorm ideas for removing barriers to building more affordable housing as well as ways to preserve existing housing stock. When Meyer convenes these groups it will promote their findings and ensure that their reports and best practices are effectively shared across the state.

“This is part of our intentional effort to be much more ingrained in the field than just as a grant maker,” explained Stamm.

Oregon Community Foundation’s Kathleen Cornett, VP of programs, said her organization is very supportive of Meyer’s efforts and is looking to it “for the bigger picture” in finding solutions to housing issues in Oregon.

Cornett said OCF will continue to be part of the solution by providing funding to organizations that build affordable housing like Habitat for Humanity in addition to giving capacity-building grants to groups to increase organizational effectiveness.

For one of Meyer’s cross-sector pursuits, it convened individuals from public and private organizations to examine key factors affecting the cost of developing affordable housing. In a follow up to the report issued by the group, Meyer has just released a Request for Proposals (RFP) for grants up to $150,000 to test new cost-efficient approaches to providing more affordable housing in Oregon.

“When we think of our housing investments more generally,” added Candy Solovjovs, director of programs for Meyer, “we are very aware that different communities have different challenges related to affordable housing and Portland and Central Oregon have different pressing issues and we want to design something that meets the needs statewide and allows innovations and support throughout Oregon.”

Under Meyer’s Affordable Housing Initiative, which has three broad goals, it has committed $15 million through 2019 to find answers to Oregon’s housing crisis.

“Fostering Innovation” is the second goal. Meyer will fund efforts that promote cost efficiencies when creating or preserving housing units. It will also support endeavors that promote strategic coordination between housing and other critical service systems and work to expand access to private-market units.

In addition to the current RFP for cost-efficient approaches, Meyer just released the names of nine organizations that received a total of about $900,000 to promote “systems alignment strategies” aimed at better connecting housing and other services/systems to help low-income families and individuals thrive.

Housing Works, Central Oregon’s Housing Authority, received an advocacy grant to produce a video about the housing crisis in our area.

“It’s excellent and very informative,” said Solovjovs about the video. “It explains what some of the drivers are that have contributed to the housing shortage in Central Oregon.”

In addition to its Affordable Housing Initiative investments, Meyer will dedicate more grant dollars to strengthen the capacity and reach of Oregon nonprofits working to address the affordable housing crisis.

The City of Bend stands out when it comes to innovative solutions for developing affordable housing. In 2006, the Bend City Council passed the Affordable Housing Fee Ordinance requiring developers to pay a fee of one-third of one percent of permit valuation. That amount was reduced to one-fifth of one percent in 2011 during the Great Recession. Money in the fund is loaned to private and public housing developers at interest rates between zero and 2.5 percent to build affordable housing.

“The council is looking at revising the fee back up to one-third,” said Jim Long, the city’s affordable housing manager.

After Bend approved the fee ordinance, the Oregon Legislature preempted other municipalities from enacting similar measures. No one interviewed for this story speculated about why Oregon Legislators restricted other cities from offering this innovative financing mechanism, but it is obvious who that decision has benefited—developers.

Long said Bend’s Affordable Housing Fund has helped organizations when they compete for tax credits at the state level. “When nonprofits show up with this, it demonstrates a local funding commitment, which makes their application score so much higher.”

“If you get a nine percent tax credit through the state, you’re golden,” said Tom Kemper, executive director at Housing Works. “That will fund 60 to 70 percent of your costs.”

Kemper said developing affordable housing is all about financing. “You can only build what you can finance. If you are charging Bend market rents at $1,200 for a two-bedroom apartment, it’s easy to make a deal work,” he added. “But if you’re only charging $600, it’s really hard to make a deal work.”

Bend’s Affordable Housing Fund has leveraged $62.6 million in state and federal dollars and over $14.2 million in private equity according to Long. It has helped fund 615 units that include 76 single-family homes and 539 multi-family units.

This June after much debate, the Bend City Council voted to exempt affordable housing projects from its system development charges (SDCs), the fees imposed on developers to fund infrastructure costs associated with new buildings. Revenue from SDCs can be used for water and road construction, plus parks and recreation programs and projects.

The Bend Park and Recreation District Board denied a request to waive its SDCs to builders of affordable housing in June.

“The board is very concerned about our community’s need for affordable housing but its members had questions and concerns regarding how the funds would be allocated to make a meaningful impact and they see the problem as an issue much broader than just housing services for low-income people,” said Don Horton, the executive director of the BPRD.

The Bend City Council awarded $750,000 of the one million it authorized in SDC exemptions to five affordable housing projects that will produce 163 units. The remaining $250,000 will be allocated later.

“A SDC can add $16,000 per door to a housing unit,” said Kemper. “Before the city approved the waivers, a 100-unit project we were developing blew up because those fees added $1.6 million to the cost of the project.”

Presently Housing Works has six housing projects at various stages of development. When completed, 180 units of affordable housing will be added in Central Oregon. Housing Works received SDC waivers for 53 units of the 163 awarded by the city.

Tom Kemper wants to bring Portland-based private developer Rob Justus and his group, Home First Development (HFD), to Central Oregon. HFD’s model can construct housing for $75,000 to $80,000 per unit, while government-funded housing projects cost around $210,000 per unit. The model does not rely on any type of government support. It doesn’t use tax credits or government loans. So how does HFD build housing at such a reduced cost?

Understanding Justus’s background will give you a clue to how HFD’s model was born. With a master’s degree in theology, Justus’s first job was as a youth pastor taking people to soup kitchens. He later founded JOIN, a Portland nonprofit serving homeless youth. The motto, “where there’s a will, there’s a way,” fits Justus perfectly.

Dave Carboneau, one of Justus’s partners at HFD who had served on JOIN’s board, told him creating affordable housing was basically a math question.

“When Dave was a Portland General Electric executive he’d been involved in financing power plants and other complicated projects,” said Justus. “He’s a math wiz.”

The prevailing way developers get paid is by charging a percentage of the total project cost.

“Nobody on our projects get paid by a percentage,” Justus emphasized. “We charge a flat fee. In our view, there’s an incentive to drive up the cost when you charge a percentage.”

Justus said they approach their projects using three levels of affordability. The first is to build in an affordable way. All of their apartments look the same. HFD standardizes its building material and uses the same doors and windows on all its projects. Some construction supplies are purchased from Portland Habilitation Center (PHC) Northwest, a nonprofit that offers training and job opportunities for people with disabilities. Buying products from PHC helps keep costs lower too.

Second, HFD uses durable material like Corian windowsills and granite counter tops reducing operation and maintenance costs. “We build with an eye to the long term to keep our costs down,” Justus said.

“Because our overall costs for our projects are less, which means our overall debt service is less, we can keep our rents down,” Justus explained.

The partners built their first project, a 47-apartment complex in 2010. “We did it with our own money to prove the model and that we could hit the price point,” said Justus.

HFD has built four projects and three are underway, all of which are for nonprofit organizations or churches. When current construction is completed, Portland will have 320 affordable housing units produced using the HFD model.

“The model we’ve developed lends itself well for rural communities,” Justus added, “because land is the variable and it costs less in rural areas than in Portland.”

It’s clear that solutions to Oregon’s housing crisis can only be solved when all the players make their individual contributions in their own unique way. Those contributions appear to be underway.

It will help us all to heed Justus’s plea if we want to solve the affordable housing crisis in Oregon: “Anyone who is committed to helping low-income people has be open to being creative and always asking the question, ‘How do we get better?’ We get caught up in doing things the same way. We need to bring a sense of ingenuity to the work because there are too many people suffering in our state. At the end of the day it needs to be about the people not our systems or our programs.”